You are here: Home / English / A conversation with the artist Judith Schaechter 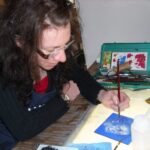 Judith Schaechter (1961, based in Philadelphia, USA) has created stained glass windows for over 30 years, especially known for her panel of agonized figures against a decorative background. She is also an Adjunct Professor at The University of the Arts and Seminar Instructor at PAFA The Pennsylvania Academy of the Fine Arts in Philadelphia.

Stained glass as an artistic medium has been dead for a long, long time, yet that doesn’t diminish its fascination.

It might not be trendy with the scholars of the art world, but it’s not going away, its appeal is eternal. Oil painting is also dead, however, it died recently so the corpse is still smelly, which is unfortunate for the practitioners of oil painting (who, I find, resist the idea that their medium is long past its prime, surprise, surprise). It’s good to work in a dead medium! It gets rid of all those riffraff who would choose it by default. 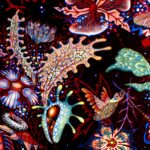 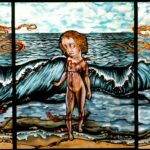 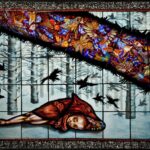 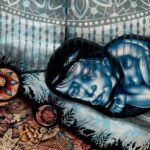 Glass is such a gorgeous substance. Color and clear transmitted light (as opposed to reflected light) enter the body physically; perhaps similar to how music “fills” us. Some people might be uncomfortable with the pleasure and beauty of colored light, yet their entire body inclines in that direction similar to phototropic plants growing in the direction of the sun. It’s easy to see stained glass as glitzy and ignore the metaphors of enlightenment, which still hold true.

The culture of art has been in trouble in the US since 1630! There’s a fear of figurative work which dates back to Puritan times. In addition, art in the US suffers from dependence on trickle-down economics; from the patronage of the wealthy. Increasingly there is less early art education in the US. From my teaching, I see a steady decline in the preparedness of art students. They have been conditioned to answer test questions, they have not been allowed to think independently or to even experience the necessary boredom wherein they might be playful and creative rather than studious and focused on set results. This is really leading to a crisis in the arts, which is largely presumed to be a luxury market anyway.

As a figurative artist myself, I am concerned about a new iconoclasm. Figurative art has been especially difficult in the US since the painting of Emmett Till in the coffin (referring to Dana Schultz’s “Open Casket,” included in the 2016 Whitney Biennial; the painting received criticism as it was viewed by some as black cultural appropriation by a white artist). But what we are forgetting is that the need to inhabit another’s shoes, such as when you look at a character in an artwork, is part of our function of empathy…something that seems so sorely lacking these days. How can we learn to inhabit the consciousness of another without trying on their identities in paintings, novels, movies and other artistic forms?

Medieval manuscripts are wonderful – I’m not referring to the main illustrations which are always religious, but the marginalia. It’s bizarre, the stuff of imagination. For my projects, I begin with doodling, I have been doodling my whole life. I find it difficult to use sketch books and prefer the edges of lined paper or papers from meetings, where perhaps I am supposed to take written notes. I then scan the drawings into Photoshop and clean them up and collage elements together to suggest whole figures. They all start as a scribble and then the scribble turns into something like a human head or a flower or whatnot. As for the entire compositions? It feels as though I am inventing the wheel anew each time. I don’t have a set method. I never have a cartoon for the glass. I make the figures and then keep them separately (sometimes for years), waiting until ideas come. I leave plenty of things un-designed in order to leave room for spontaneity and improvisation, which are obviously more difficult if one is working from a completely planned drawing. 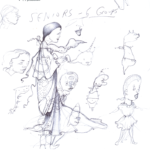 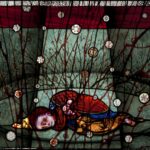 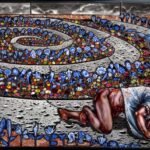 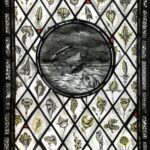 I am not primarily a painter, but an engraver—get almost all of the color in my work from engraving into flashed glass. However, I do paint, although reluctantly! Glass paint is so icky, it’s like painting with dirt and I find it difficult. I use Reusche paints, 1059 Stencil black, 1333 Red for flesh and silver stain which I paint on a sandblasted surface. It’s possible to paint matt and trace lines together on sandblasted glass since the sandblasted area will hold the paint. One doesn’t even need gum Arabic on sandblasted glass. I don’t paint with additions to the paint, no “turpentine or salad dressing” mixtures. Just water and maybe a little bit of gum Arabic. I do up to 7-8-9 firings per piece. For engraving, I use flashed Lamberts glass. First, I sandblast, sometimes with stencils, but nothing elaborate. All the detail is then added with hand tools such as flex-shaft engravers and Starlite diamond files.

Sometimes people let me know they find my work depressing and want to understand why it isn’t more positive. I’ve been told that if I did vases of flowers then the work would definitely sell. However, my subject matter doesn’t seem unhappy or negative at all to me—I see the characters in my work as people who are working through their feelings, becoming uplifted and transcending their situations, if you will. What could be more joyous? My artistic brain is primitive enough that I believe by making a beautiful image out of something that was difficult or unpleasant to deal with, one can actually convert it into something that one can accept, cope with, and even appreciate. Like a sewage treatment plant processing waste to make usable water again…or at least fertilizer!